This year, SJZ Summer Jazz Camp welcomes Bay Area native Taylor Eigsti as its special guest. Before his appearance on June 29 and 30, we spoke with the New York-based pianist by phone to learn why he connected with music at such a young age. We also asked if he had any advice for our eager campers before they arrive at Valley Christian High School on June 19. What first drew you to the piano? Did you grow up in a musical household? I definitely did grow up in a music household. My sister, who passed away when she was 17 and I was 3, was a jazz and rock pianist. My dad was a drummer for a hobby. I was exposed to a lot of really good music. It didn’t really dawn on me that you could have a career in music until I was about eight years old. I had asked my dad how much one of my favorite pianists had to pay each time he performed. He explained to me that you actually get paid to do it. At that point, I was pretty sold. I feel really lucky that I was able to find my passion when I was really young. A lot of people don’t really figure that out until later on in life. With that said, were you performing in public a lot from a young age? The first time I got a chance to play with Dave Brubeck, I was 12 years old. That led to a lot of other opportunities – doing concerts with my own trio, playing in other bands, and touring quite a bit with the Brubeck Brothers. I started doing that when I was 14 or 15. What did you learn from Dave Brubeck that still influence how you look at your playing or your career? Two of the biggest things I learned from him were that you can do this your whole life, and you can be nice to everyone. The last time I saw him, I went to his house to have dinner. It was past the point when he was able to travel to perform, and I remember he had a little Casio keyboard he was messing around with at the dinner table. To have a career in music, you have to love what you’re doing enough that the reason you’re doing it is your engagement with the music. [Music] is one of those professions where it’s just a part of you, so you can do it your whole life and not have to separate your job or work from what you really like to do. It’s really a beautiful combination. 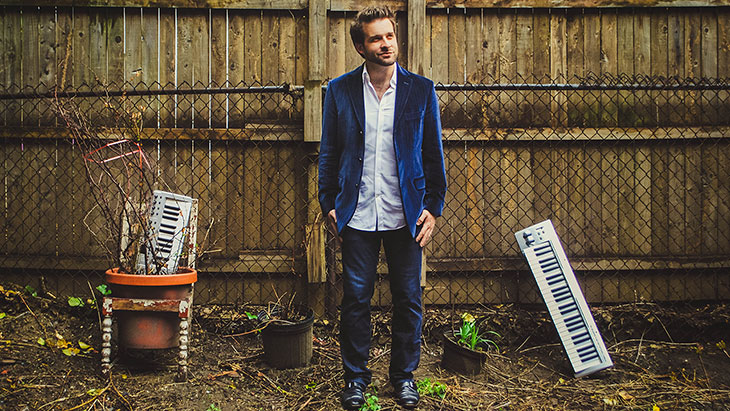 Tell me a bit about your experience with SJZ’s Summer Jazz Camp. My first time at San Jose Jazz [jazz camp], it was called Jazz Goes to College. I think it was one of the first years it started. I was there as Smith Dobson’s assistant. Smith would leave the room and have me take over the class. I thought he was running an errand, but he would secretly be watching through a crack in the door. He wanted to put me on the spot and have me teaching from an early age. One of the greatest things I gained from that experience was the ability to start articulating musical ideas and finding ways to help people understand and develop musically based on my experience or whatever else. It was a great thing, because I think when people have the opportunity to start teaching early on, you learn so much from being a teacher. I was lucky to have the opportunity to start that early on, because now I’ve been teaching in various contexts for more than 20 years. Getting a chance to lead a class at that at age must have been both nerve-racking and highly rewarding. At that time, camp was all ages. There were people I was teaching who were around my same age, and then there were full-on adults. For me, it was a bizarre thing, but it was good really early on to understand that we’re all sharing information. Anyone can learn from anyone. What advice would you offer students eager to spend a few weeks at camp? When I was that age, my biggest takeaway was making friends and being social. Ultimately, you’re all there learning musical things and interacting with the music, but jazz is a social art form. Learning the mechanics of operating socially with people is immensely important, especially later on in life. If you end up touring constantly, you’re around other human beings all the time, and you’ve got to get along with them.

I’ve found that the most impactful thing is to experience something with friends. That’s the great thing about those kinds of camps. When I was 11 years old, after [Jazz Goes to College], I was a student at Stanford Jazz Workshop a few weeks later. The first combo I was in was with Thomas Pridgen on drums, who went on to win a Grammy with Mars Volta, Ambrose Akinmusire on trumpet, Dayna Stephens on sax, Ryan Snow on trombone, Charles Altura on guitar. I find myself still playing with these people. When you meet people at a young age that you’re playing music with, those people stay with you. They can become friends for life. Do you think that’s important to the longevity of jazz, to have a place where young musicians can come together and inspire one another? I tell this to a lot of different master classes of students: not everyone in a big master class at a jazz camp is going to go on to have a professional jazz career, but some of them might go on to have a career in music, and what they learned there will apply on every level. There are so many other branches to what’s going on, and when you learn about the music and you’re in that social environment, you see how you fit into it. I always encourage people to not get too caught up in the pressure of saying, “I’m here because this is the way I’ll have a career as a jazz musician.” Maybe someone will go on to be a pop musician, and maybe someone will go on to be an athlete or something else, but they got something out of that interaction with the music. If someone comes into one of those places and they’ve never been around jazz, if they’re around friends and they’re listening socially, it can be really eye-opening and can be a really powerful, amazing experience to be engaged in that.